The very special art project with the Dunedin Elementary School is entirely Cathy's creation.  I added logistical support and installation but Cathy conceptualized and brought into being the entire project.  And what a great project it is.   She worked one on one with every single student, faculty and staff member of the school year in 2009.

The overall concept was to have each individual paint with underglazes a 6 by 6 inch ceramic tile piece. Then we would apply the clear glaze on the tile and fire them in our kiln. Cathy went to the school and met with each class, after explaining the art project she had pratice sessions with the students then sat with each one while they created their very own ceramic tile art piece.

The project was divided up among the different grade levels. Each grade level created a large ceramic tile mural by assembling the individual tile pieces together in a predetermined design by Cathy.  Kindergarten and First Grade each made their tile mural by making a hand print on the 6 by 6 tile.

Each tile mural has 162 pieces and is approximately 4.5 feet high and 9 feet wide.  After all the murals where finished we installed them at various locations around the school in the hallway areas so all could enjoy the artwork created.

The kindergarten mural says "The World is at your finger tips!"  The hand prints are surrounded by the letters of the alphabet and numbers one to twenty. 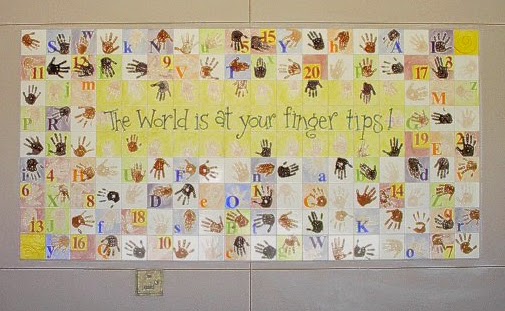 The First grade tile mural says, "Believe in yourself and others will believe too! Believing is Magic!"  The hand prints are surrounded by letters and little sayings. 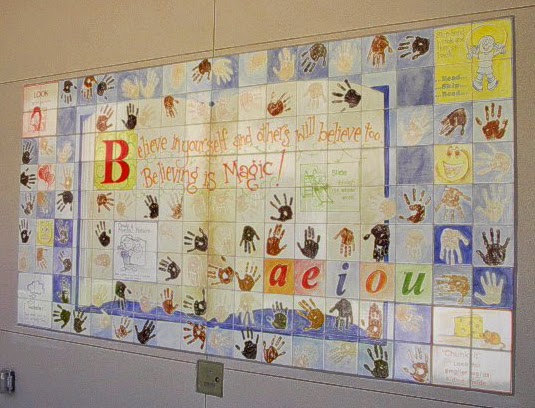 The Second grade tile mural says, "I've never seen a smiling face that was not beautiful." 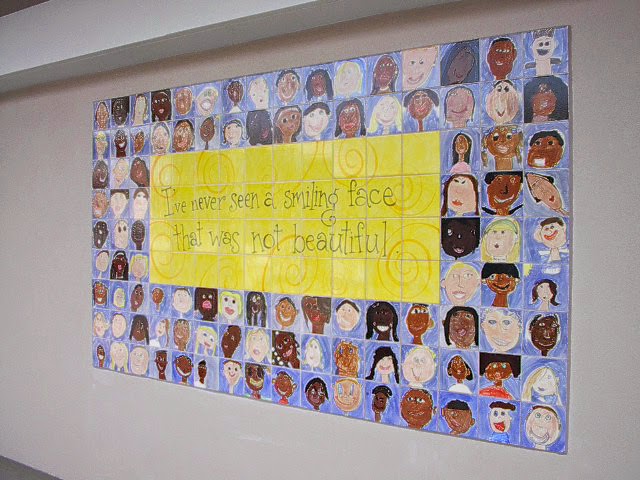 For the second graders Cathy worked one on one to help each student create a self portrait.  She conducted practice sessions before they painted directly onto the ceramic tile.  You have never seen anything as precious as these self portraits.  And the amazing thing is when you see the students that created them it is readily apparent which portrait goes to which student.  They all did such a fantastic job. 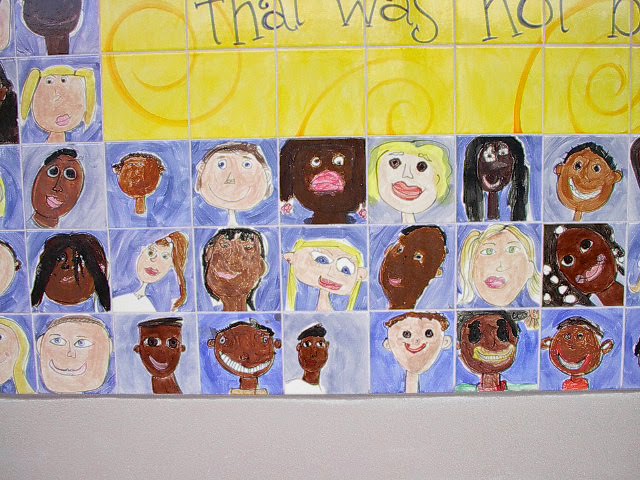 The Third grade tile mural is again composed of self portraits and it says, "You create your own power.  Once you Believe you can Achieve!" 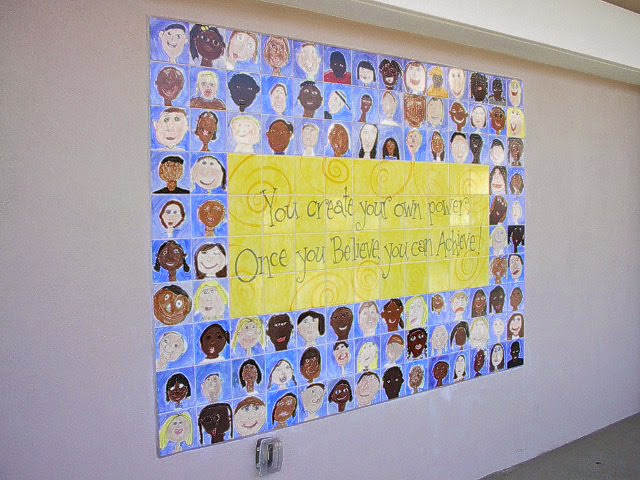 The Fourth graders where assigned a completely different task for their artistic creation.  The school campus has a great courtyard area where the students gather for different events.  The fourth graders created a two vertical tile murals that where installed on columns in the courtyard.

I outlined the colums in red so you can see the general layout of the courtyard area and where the artwork went. 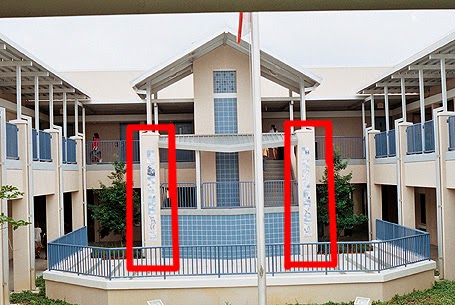 This next photograph is a closer view.  Each column has 48 tile pieces. 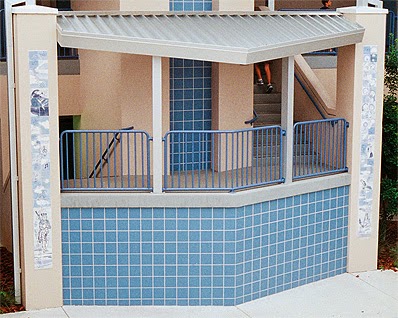 In the next picture I photoshoped the two columns so you could see them together.  The school is in Dunedin, Florida and the surrounding community has strong Scottish roots so to honor that different Scottish themes are used here and there throughtout the school.  The images of the tile piece here are centered around music.  I know these photographs of this piece are not too great but the students painted children singing and musical instruments. On the bottom of the left side there is a kilted man playing the bagpipes.  The school song is written on the piece also.  It weaves itself through the images starting on the left bottom side going up and then again on the top right going down.


We lads and lassies singing.  Honors to Dunedin bringing.  Onward and upward ringing.  Our school is grand!


Hark now the pipes are calling.  Sweetly the tones are falling.  Proud Eagle voices calling.  All through the land!

The mascot for Dunedin Elementary is the Proud Eagle. The Fifth grade classes created a tile mural that was installed in a location that you see right in front of you when you enter the school grounds.  For this mural each student got to paint an eagle on their tile piece.  They were given the opportunity to look through nature books and magazines and pick out an eagle photograph they liked.  Then they practiced painting it with paper and watercolors.  Once they felt comfortable Cathy worked with each student to create their very own eagle ceramic tile piece.  There are 100 eagle tile pieces. 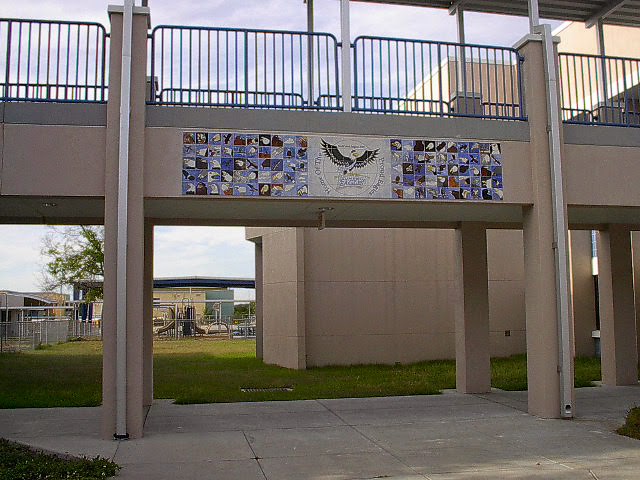 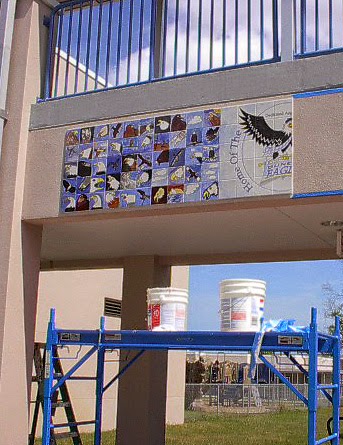 The next photo is to give you a relative size, that's me installing the Fifth grade tile mural. 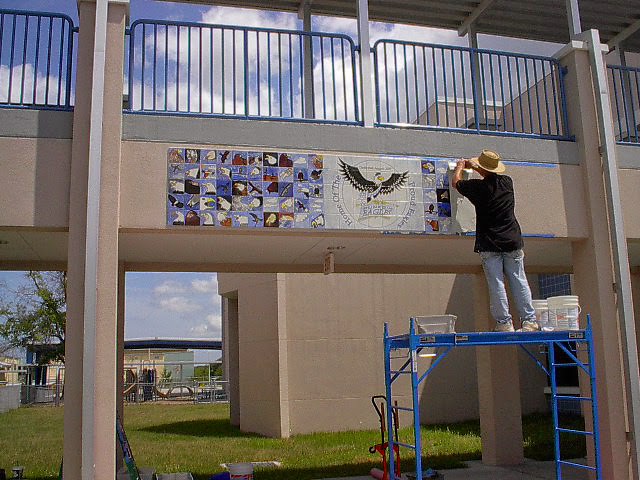 With all the students having created their very own ceramic tile piece of art for the school Cathy then worked with the faculty and staff.   Together they created 4 "Commitment to Character" ceramic tile murals that were installed on 4 columns as you enter the school grounds.  Cathy designed the murals and the staff then painted them.

They all say "Commitment to Character" in the yellow area at the top.  This first one says, "We show a positive attitude!" and then has three captions.  The first caption says, "I can do it!"  - the second caption says, "Let's work as a team!" - the third caption says, "Great Job!" 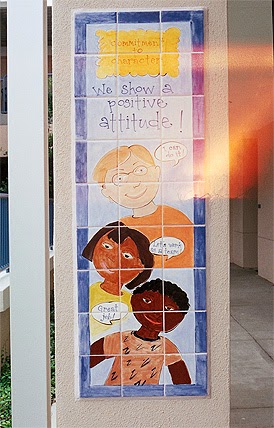 The caption on the second mural says, "We respect others!" 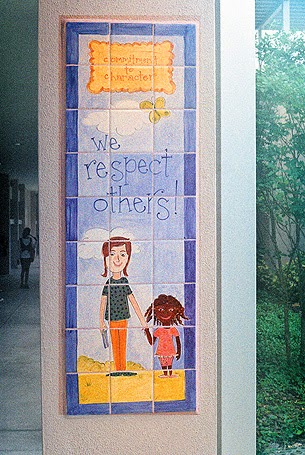 "We are polite!" says the third tile mural and the first caption says, "May I please." - the second says, "Thank you." - the third says, "Excuse me." 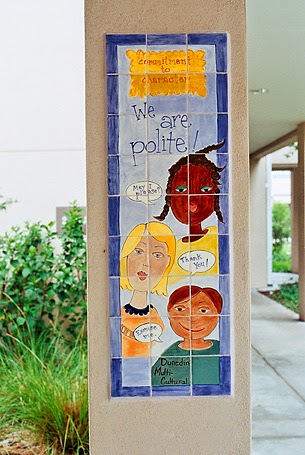 The fourth tile mural says, "We participate fully in our learning."  and the caption on the student's shirt says, "Think outside the box." 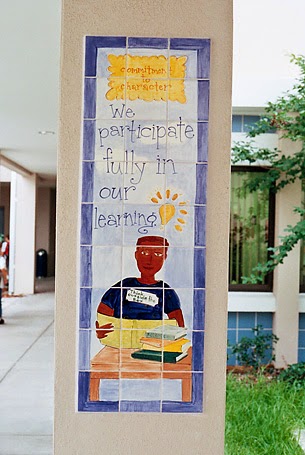 This very special art project for Dunedin Elementary School was a truly momumental achievement by all involved but especially Cathy.  Cathy took about 2 months to imagine the entire project and create the concept.  Then she started in February working with the students at the school.  By the end of May we had installed the last mural on the walls and columns of the school campus.  You can just imagine the effort involved working with the entire student body and staff.  We know from the feedback of the faculty how proud the students were of their work.  We managed to have all the murals in place before the end of the school year so all the students could enjoy their creations and see how their very own artwork enhanced the beauty of their school.

In ending this post I would just like to show a few shots of the 5th graders as they worked on their eagle tile pieces. 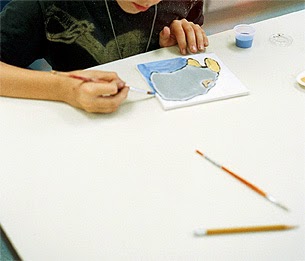 It is interesting that in the next two photos you can see how the students were practicing with paper and watercolor before they painted on the tile with the underglazes. 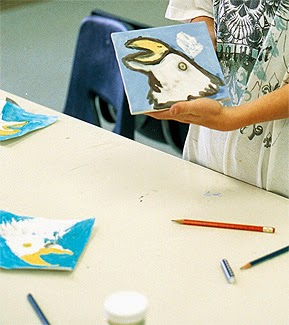 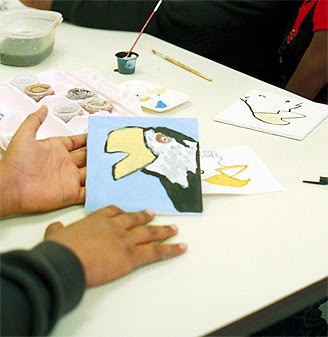