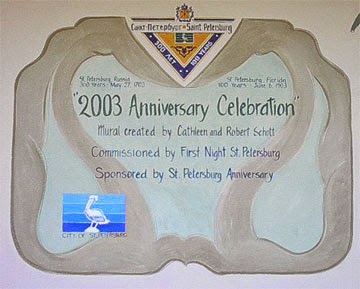 Dear Bob and Cathy,
Thank you so much for your wonderful work on the 100-300 Celebration Mural on the Florida International Museum Building. The mural is beautiful, it incorporates so many of the historical moments and buildings in both
St. Petersburg, Florida and St. Petersburg, Russia. Every time I drive by I see people looking at it and reading the notations.
Our community will enjoy this wonderful work of art for quite some time.
Thank you again! Pat Mason/Executive Director - First Night St. Petersburg 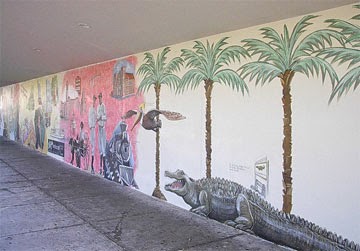 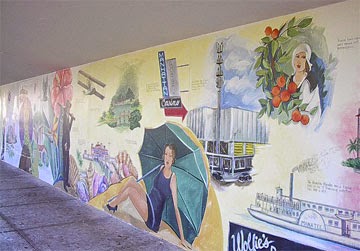 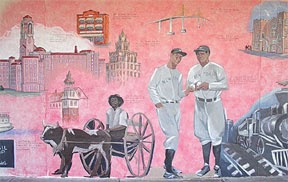 Each image in the mural is meaningful to the history of St. Petersburg.  For example in the photo above;
Starting from the top left quadrant where there are four buildings.


1. The biggest image with the white cloud behind it is the Vinoy Resort. Designed by Henry Taylor at a cost of $3.5 million the opulent hotel opened January 1, 1926. It was closed in the 1980's and then starting in 1990 renovated at a cost of $98 million. It is now a 5 star resort on the downtown waterfront.
2. The building to the upper right of the Vinoy is a 1926 view of the St. Petersburg Times.
3. The building to the immediate right of the Vinoy is the Snell Building built in 1929. It was renovated in the 1980's and is one of the jewels of downtown.
4. The tower below the Vinoy is part of the original Detroit Hotel in downtown St. Petersburg built in 1980's. There is an interesting story about the naming of the city. A Russian gentleman from St. Petersburg, Russia and another gentlemen who built the hotel flipped a coin. The winner got to pick the name of the city and loser would pick the name of the Hotel. The Russian man won.
5. Below the tower is an African-American man on a cart. He is John Donaldson, the first Blackman to settle in St. Petersburg. It was after the Civil War.
6. The two baseball players are Lou Gehrig and Babe Ruth at Al Lang Field in 1934. The Yankees held spring training in St. Petersburg from 1925 to 1961.
7. The bridge above them is the Sunshine Skyway which spans the mouth of Tampa Bay.
8. Next to that is Bethal Church, a prominent Black church built in the 1920's and in still in use today.
9. Below that is a Locomotive engine from the Orange Belt Line circa 1893. 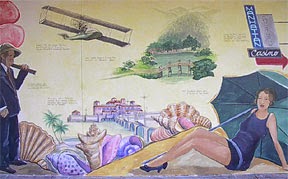 In the photo above of the mural;
1. The airplane is Tony Janus's 'Benoist'. On January 1, 1914 his airboat flew the mail across Tampa Bay. This is the first recorded flight when an airplane was used for commerce.
2. The lake with a bridge across one end is the lake Nanko Bridge in Ritsurin Park located in St. Petersburg's sister city of Takamatsu, Japan.


3. The building in the center is the Million Dollar Pier. A center piece of the downtown waterfront. At its opening in 1926 an estimated 3,000 couples danced on the rooftop ballroom.
4. The woman sun bathing wears fashionable beach attire of 1933 as she sits on the sand of Spa Beach, a popular beach next to the Million Dollar Pier.
5. The Manhattan Casino was a prominent night club in the 40's and 50's. Head line jazz greats like Duke Ellington and Louis Armstrong made regular appearances.  The original sign is depicted below. 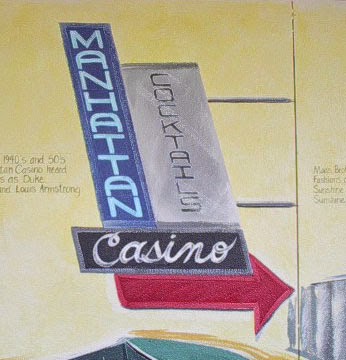 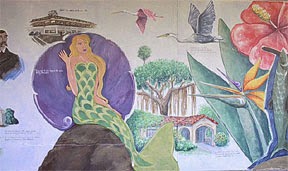 In the area of the mural above;


1. The building above the Mermaid is Webb City it was billed as 'The World's Most Unusual Drugstore'. On the top floor there was a Mermaid exhibit with live Mermaids to entertain.
I remember going to Webb City as a young boy and getting my hair cut there. All children got a free scoop of ice cream with a haircut.
While we were painting the mural an elderly man of 77 walked by and told us he used to be the head waiter in the restaurant at Webb City and he could still remember the Wednesday special of Chicken Pot Pie, salad and glass of lemonade for 39 cents.
2. Next to the mermaid is the original building for Sunken Gardens (opened in 1924), a six acre tropical garden and gift shop. It is still there and still in operation. When you come to town it is a must see. The Bird of Paradise and Hibiscus flowers shown are only 2 of thousands of species of plants and flowers in the tropical garden.
3. The birds shown flying are the Great Blue Heron and the Roseate Spoonbill. The Heron is seen all over the Tampa Bay area. Roseate Spoonbills are more elusive and only seen at certain locations. Often times because of the pink color Roseate Spoonbills are mistaken for Flamingos. 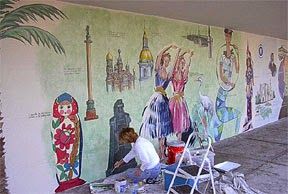 In the section of the mural above (which is on the left side of it) is devoted to images of St. Petersburg, Russia.
1. The first image is a Matryoshka a favorite toy for Russian children.
2. Next is the Alexander Column built in 1829 to mark the defeat of Napolean.
3. Cathy works on a rendering of the grave marker of Theodore Dostoezvsky, a literary great.
4. Above that are the towers of the Cathedral of the Ascension compeleted in 1907 which exemplifies a Russian Nationalist style.
5. Next to that is the tower of the Cathedral of Saint Nicholos of the Sea built in 1761.
6. The ballet dancers are there to pay honor to the Russian Ballet.
7. A common crane stands next to the 'Acrobat' painted by Marc Chagall in 1914. Chagall is considered one of Russia's most accomplished artists.
8. To the top left of the Acrobat is the Trinity Bridge which links the city centre with the Petrograd Islands.
9. To the immediate right of the Acrobat is a painting of Marguerite Blocker. She was the flag bearer in March 1913 to the St. Petersburg Fair and Tourist Week parade.  A close-up in the next photograph below. 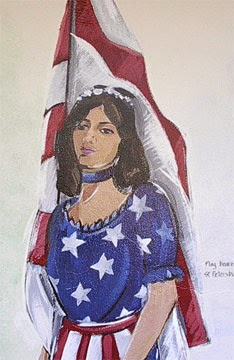 Another image we included in the mural is to symbolize the importance of the citrus industry played for the city at the turn of the century. 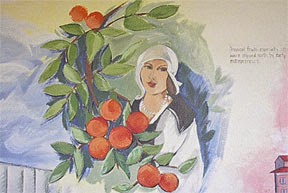