I was asked to work a really challenging project for the Vinoy Renaissance Resort & Golf Club.  This is a five star resort located in St. Petersburg, Florida on the Tampa Bay waterfront.

This first picture shows how great the Vinoy looks at evening. 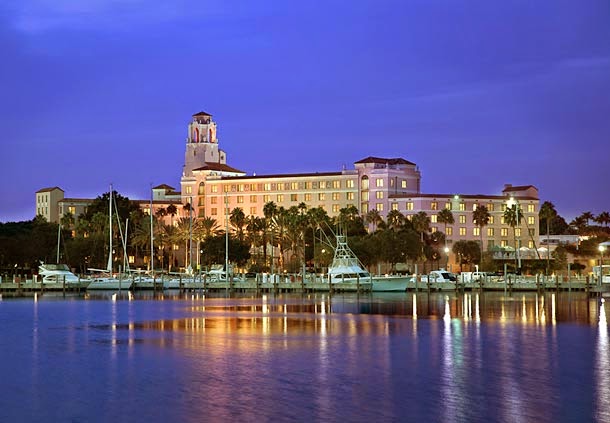 The main Ballroom with its elegant decor is a coveted space for special occasions. 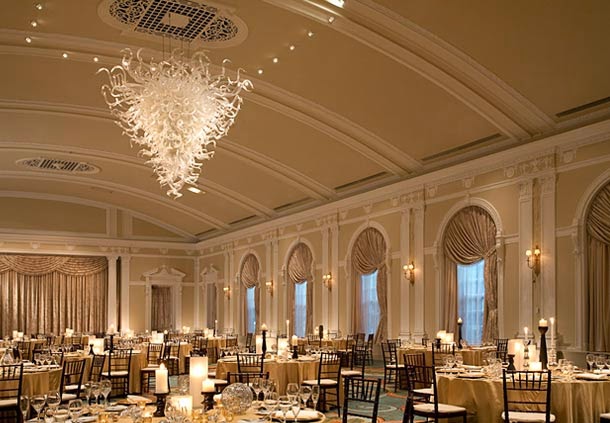 There are several restaurants in the Vinoy.  The mural restoration was done in the main restaurant called  Marchand's.  In 1992 when the resort was fully renovated the mural in Marchand's was only partially restored.  The mural runs above the floor area and wraps around the top of the restaurant on all four walls.  At the time of the restoration is was decided to only restore the lower portion of the mural.  This was done after major work on the supporting structure. This restoration work recreating the original 1925 mural was accomplished by artist Tom Stovall and fellow artists Sam Bond and Hitch Roney.  There is a fabulous video that shows the state of disrepair the space had fallen into and the team that restored the lower portion of the mural to its original glory.

Here is the link to a video of the mural restoration.

I got involved in the project when Tom Stovall, the artist who restored part of the mural in 1992 called me. To celebrate the 20th anniversary of the reopening in November of 2012, the Vinoy called Tom and asked him to restore the upper and larger part of the mural that had been covered up with panels all these years.  So Tom called me to help and I was really happy to be asked.

We uncovered the mural and undertook extensive documentation of every aspect of the remaining image.  Our mandate was to restore the mural exactly as it had been in every detail but the walls were in such a state of decay that the only way to begin was to completely replaster the surface of the walls after the necessary repairs where made.  So before that happened we took dozens of photographs, measured the exact location of all the elements in relation to one another and then actually traced out the entire mural on paper.  Then we started the restoration with a blank wall.

The two areas we undertook to restore are 4 feet high and 36 feet wide.  They are located at each end of the restaurant.  The longer walls which are approximately 100 feet in length are still covered over.  I am hoping that the Vinoy decides to  restore that part of the mural soon.

I had planned to show the wall mural in the state it was when we started but the video documents that part of the story so well there is no need to go over it again.

I just want to post some photographs of the finished project.

First is the West wall mural from ground level.  The design of the mural repeats elements but the interesting part of that story is even though the basic elements are repeated they are different.  For example on this wall there are six vases that hold fruit and flowers.  Each vase is the same shape but holds different types of fruit and flowers. 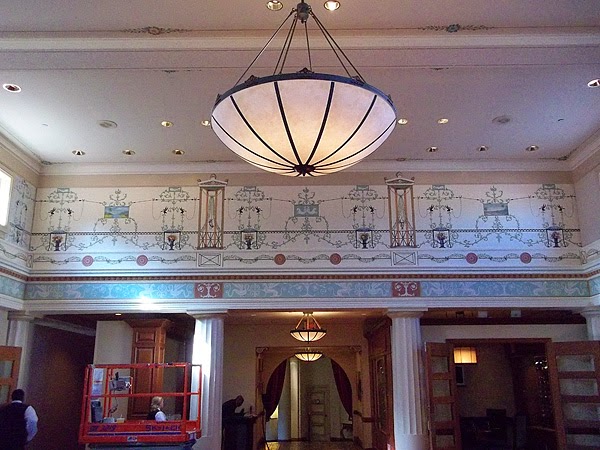 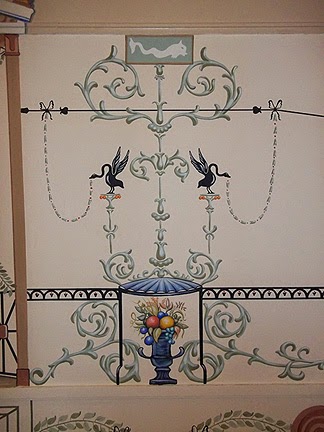 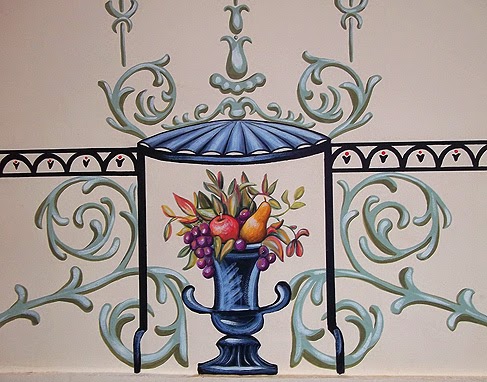 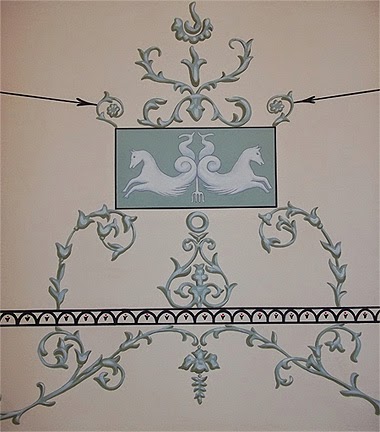 There are four small landscape pieces in the mural.  Two at each end of the restaurant and each one is a different scene. 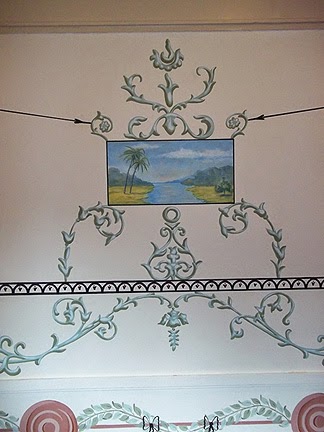 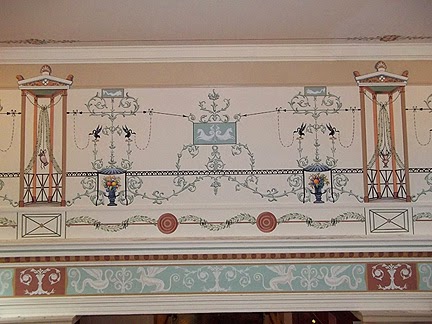 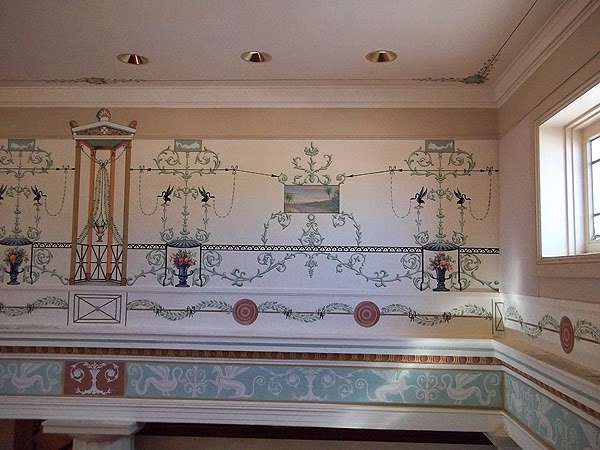 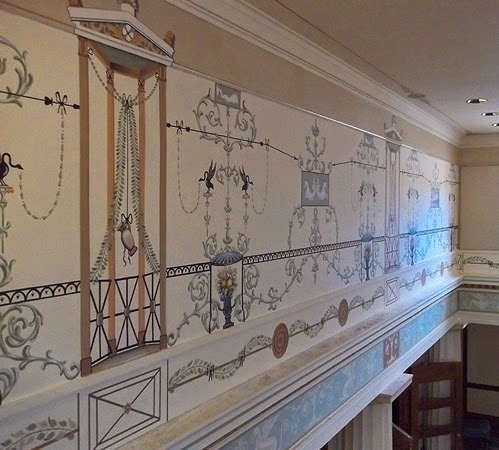 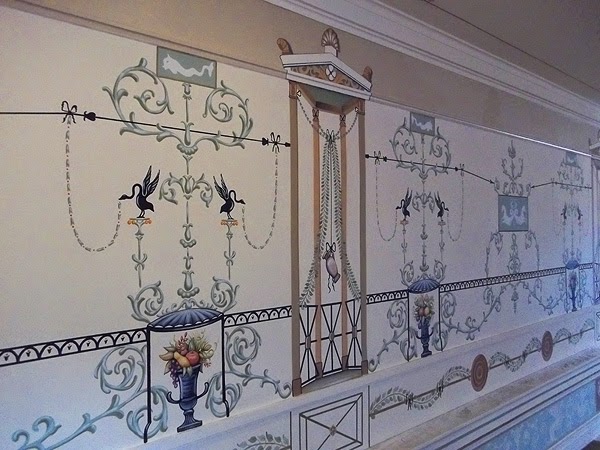 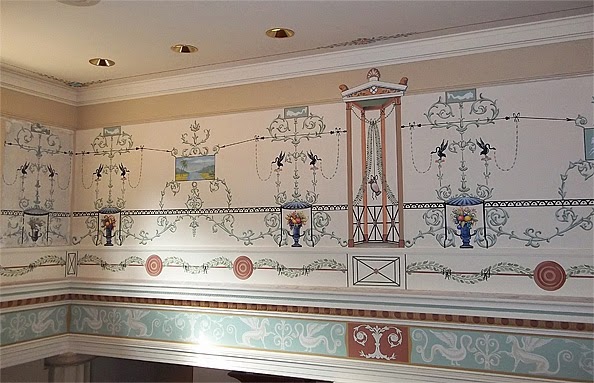 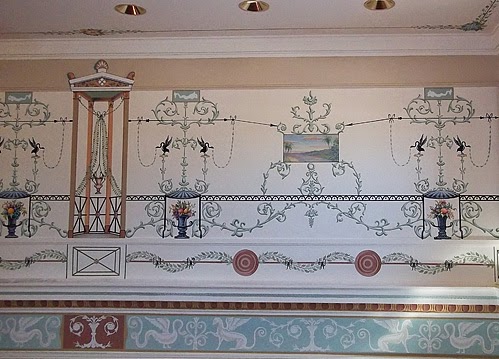 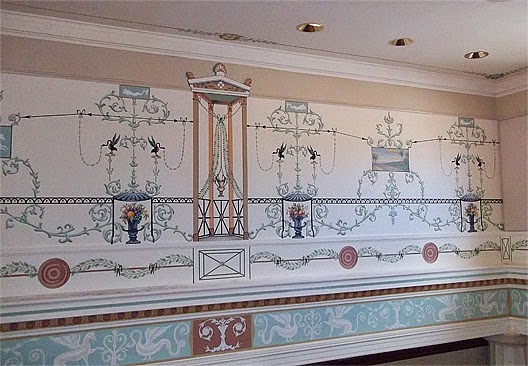 This next photograph is really cool.  This was Tom's idea.  In the left corner of the mural as you face the West wall you can see a small section of the original 1925 mural and then the restored mural together.  Because of the historical nature of the Vinoy and its beauty, they have tours of the building.  The docents like to point out this feature of the mural when giving a tour to show the folks the original mural and the restoration side by side. 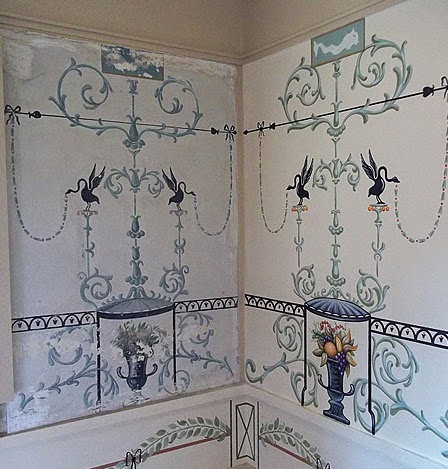 The next photograh is of Tom Stovall working on a detail and the following photograph is me. 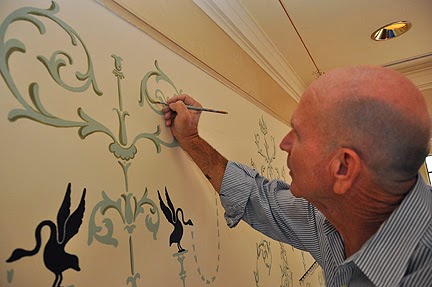 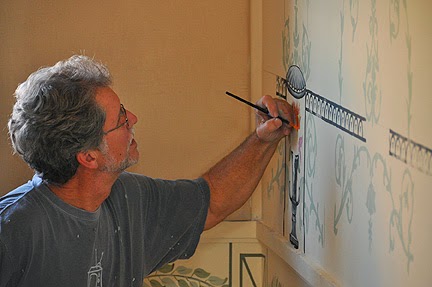