The foyer to this beautiful home has a ceiling which is 33 feet high.  I know it is exactly 33 feet high because I measured it myself.  I had to know the exact height because we needed a sissor lift that would reach the ceiling.

As you look at the first photo below you can see Cathy with the lift up and laying out the mural.  Her detailed 'blueprint' of the mural is drapped over the railing.  We carefully measured all the spaces to get an idea of the layout.  Most of the surface area to painted was above the second floor. 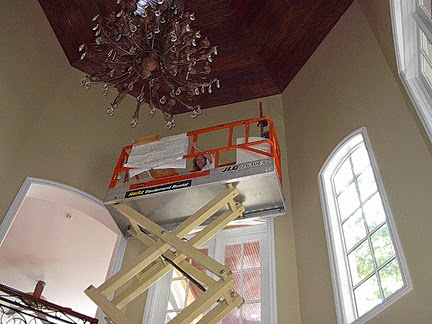 In the next photo you can see how far she has gotten.  The idea was to paint the walls like they were stone block but only up above the second story windows.  Then paint a ledge there with various architectural features on that as you will see.

There is a story on the lift itself.  I knew the lift was going to be extremely heavy and I did not want to crack any of the marble flooring in the foyer.  So I covered the entire foyer floor with 3/4 inch plywood to help disperse the weight and to avoid any tire marks.  I also had to build a ramp to get the lift up the stairs and into the home.  It took 2 days to get ready for the lift.  Once it arrived and we drove it into the foyer and tried it out... it only went up 25 feet, not nearly enough.  So back went that one and they sent a new one out.  The second barely made it into the foyer through the front doors, the railings cleared the doors by less than 2 inches.  When we tired the lift out it reached high enough but only extended as high as it would go.  We maxed it out but the next size lift would not fit in the home so luckily it was high enough.  However for the highest parts of the mural the lift would creak and groan like crazy as it extended to its limit.

I give Cathy a lot of credit for sticking it out as she does not like heights and the creaking and groaning was bad enough but fully extended it swayed as you moved around on the top.  As you can see it barely fit along each side of the octagon.  That was another challenge, to drive it in position with every move without damaging the surrounding walls and trim pieces. 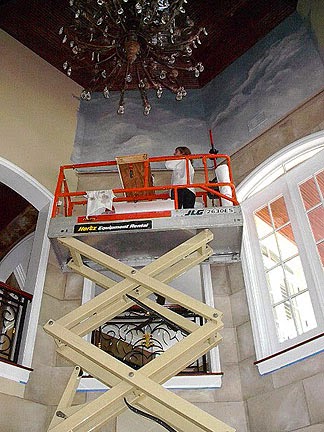 Painting the mural in this foyer was a complicated and very ambitious project.  To show you the mural I am going to start out showing you the blank wall area then the finished part of the mural that went there.  In this first before photo note the arrow on the left showing an air vent and the arrow on the right pointing to a vaulted ceiling area on the second floor. 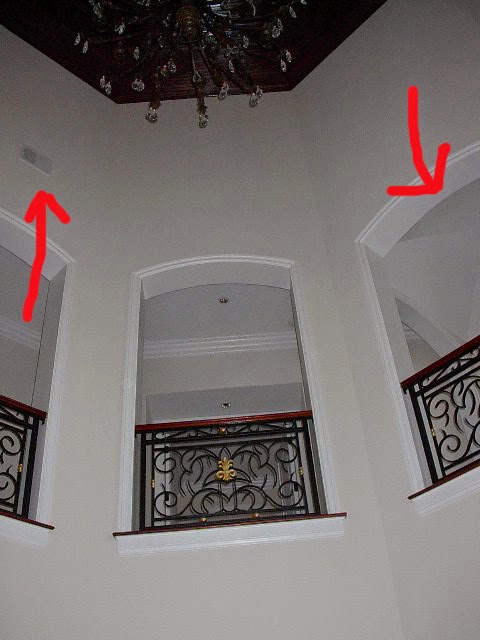 You can see the air vent on the left side of the column in the next photo.  Cathy did a masterful job on the drapery as it hangs and folds and lays across the top ledge of the stone block wall. 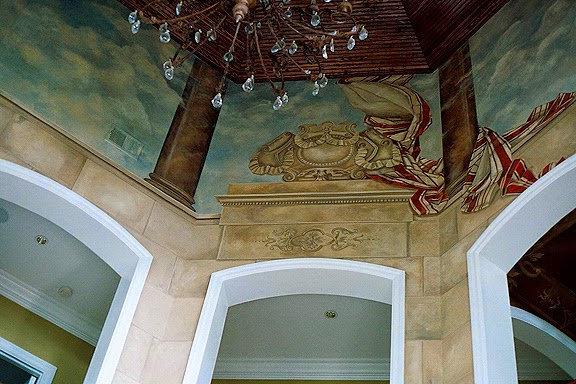 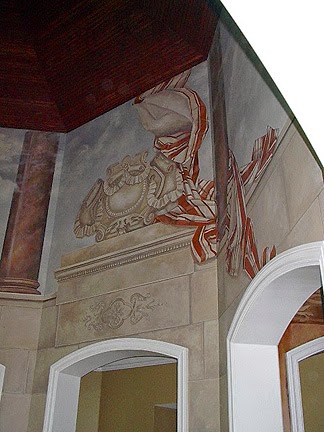 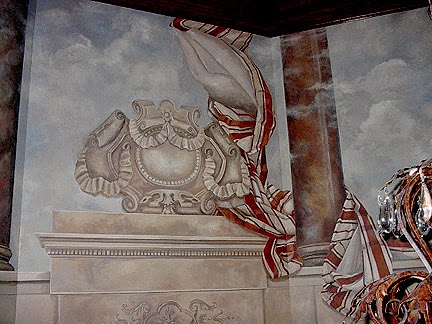 Here is the artist herself looking down from the second floor.  You can also see how she painted the arched ceiling in the hallway area to the right of her.  More on that in another post. 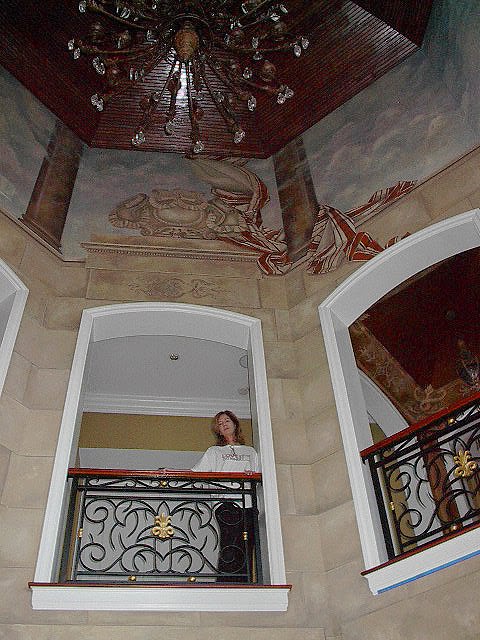 Moving along to another section we first see the before photo. 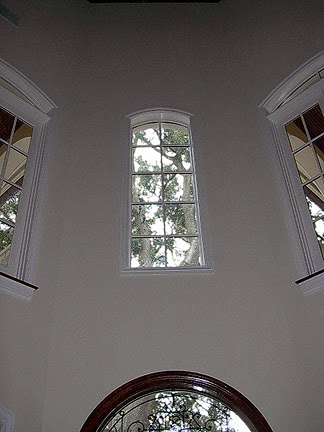 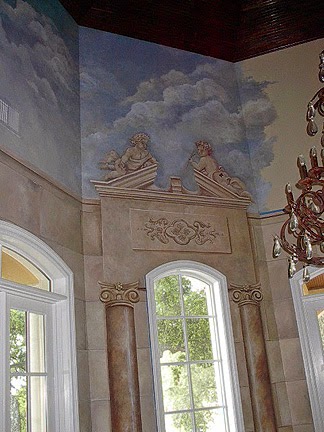 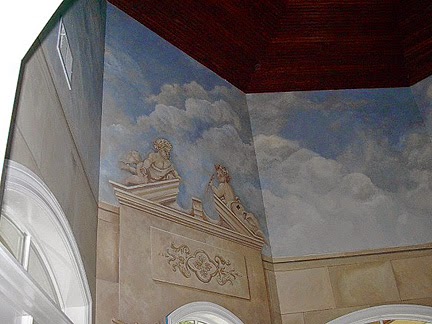 I think it's a real interesting look between the photo above and the next one.  It shows how Cathy has started to paint in the drapery for this section. 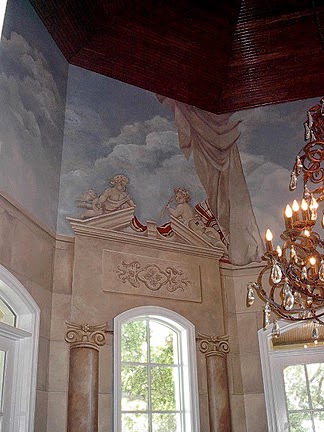 The next three photos are details of the finished area. 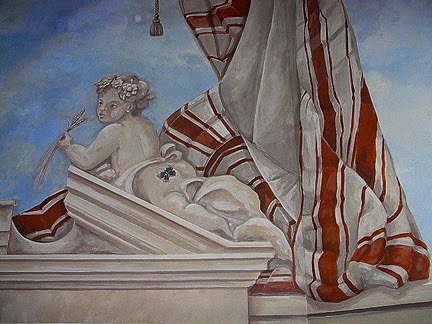 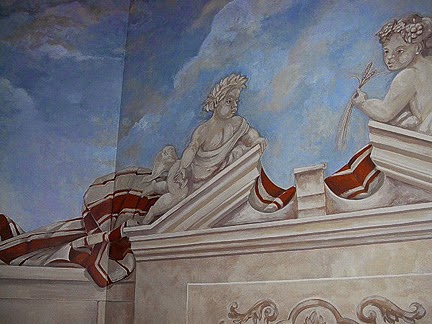 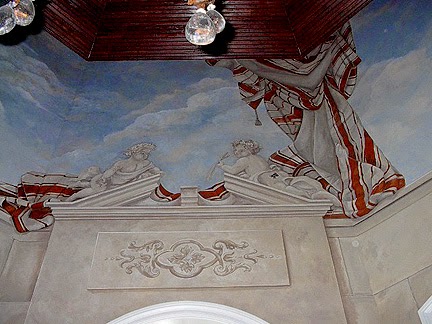 Hmm,  this next section of the top ledge needs something. 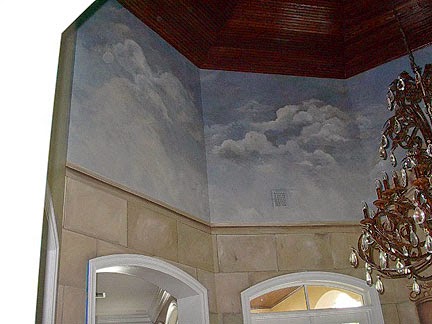 This section of the top level has the homeowner's pet Ocelot sitting next to an urn with some drapery. 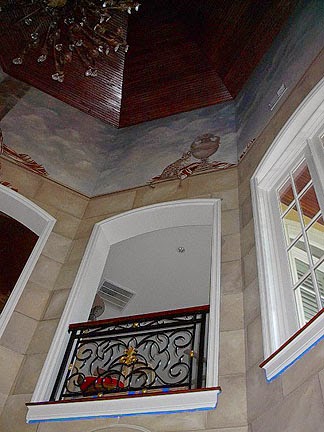 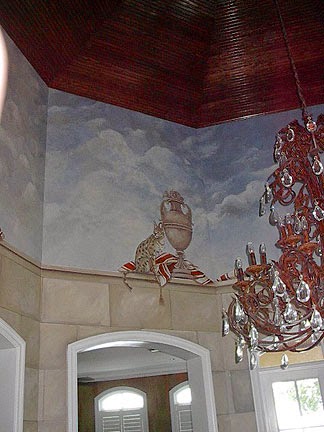 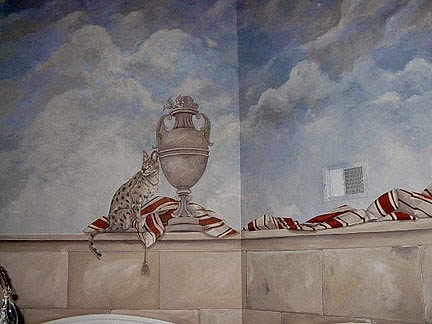 The before on the largest area to be painted. 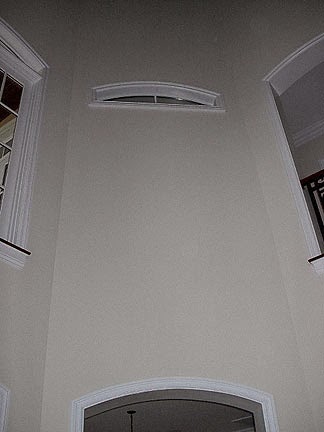 Cathy really did just a super job on this area.  She painted in an opening with an iron gate and then once again created a masterfully draped effect with the striped fabric. 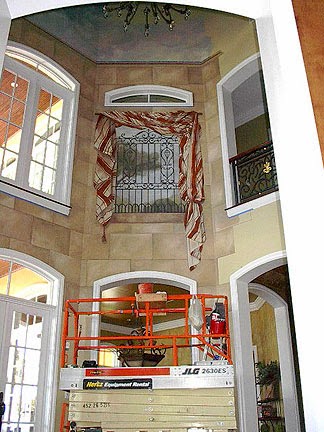 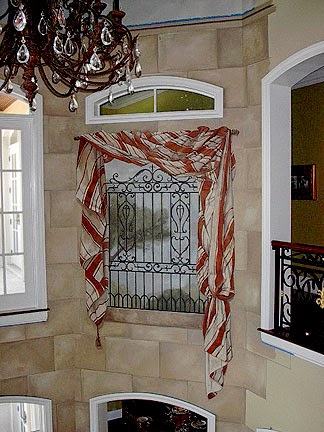 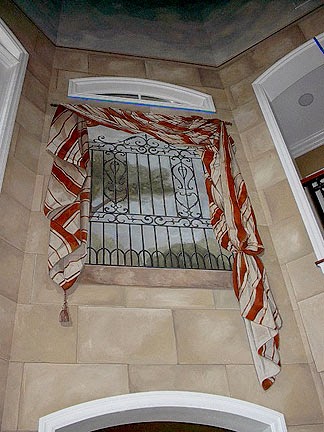 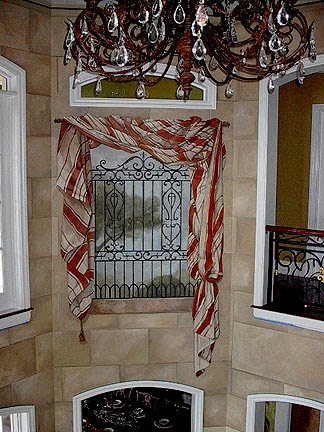 As you can see the space between the windows and door openings on the second floor and ground floor leave little space to paint in.  They are all painted to look like the stone block work.

Given all the logisical challenges this was quite the major accomplishment that Cathy pulled off and she did it with her usual artistic excellence.